DISCUSS ANYTHING NOT RELATING TO ASTRO/SAFARI
IF YOU HAVE A PROBLEM, COMMENT OR COMPLAINT ABOUT THE FORUM, PLEASE POST IT IN THE FEEDBACK SECTION

November to March is prime Desert Season here in Southern California. It's not just the only "sane" time of year to visit Anza Borrego Desert State Park, it's the time of year when the beautiful sunny days and temperate nights make it a "must see". Sadly, a big chunk of that time is also "Crazy Holiday Busy Season", so it's all too easy to start thinking about a gearing up for the desert in early October when it's still a little too warm, and then suddenly find yourself with two weeks to Valentine's Day before you realize you didn't actually get out there.

As such, when I learned that Kimberley would be tied up with work stuff for most of the first weekend in December, I figured it was a good time for a Daddy-Daughter camping trip. Our first such trip, I should point out. I've been waiting for these since before Annika was born, but the the level of solo effort to keep her safe/entertained while also setting up camp/cooking/cleaning/breaking camp was a bit daunting. Combine that with the fact that Annika (and me too, for that matter), strongly prefers to have the whole family along, it just hadn't happened yet. Time to change that!

Aside from camping and hiking with Annika, one of my greatest joys as a Dad is teasing her and keeping her guessing. As such, I didn't tell her where we were going this weekend, only that we were "Going to see Mammoths and Dinosaurs. And maybe do a little hiking." There were a million questions, and each answer just made her more curious. "Do you mean fossils?" - We'll probably see some of those too, but these aren't fossils. "Are they toys?" - No, some are bigger than the van! "Is it a movie?" - No, you can touch them, if you're brave!

We rolled out early on Saturday morning. One of the changes that makes a trip like this possible now when I would have needed Kimberley around a couple of years ago is that Annika travels better now. We can cover more mileage and she's easier to keep engaged with conversation, music, and scenery. It's not all frivolous time spent either. Annika took the opportunity to ask some serious questions about the reasons behind why they'd been doing "active shooter" drills at school. As always, I tried to answer seriously and honestly, giving her enough information and instruction to keep her safe, without making her scared of the world.

After an obligatory stop at Dudley's for Ginger-Molasses Fruit Bars, we made good time to Borrego Springs, CA. A quick visit to the ABDSP Visitor's Center was mostly a hit, but from Annika's quickly souring mood, it was clear we needed another calorie infusion, STAT. After lunch, we finally headed North to stalk our prey. 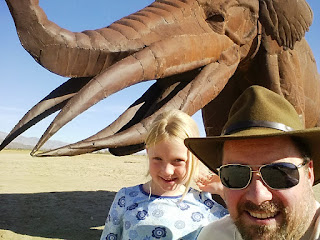 I only regret not having a camera pointed at the back seat, because the look on her face when we came up on the first herd of Gomphotheres was totally priceless. As you approach over the sand, it's clear that they're really there and totally huge. I will remember her gasp and giant eyes forever. It wasn't until we climbed out of the van and she (bravely) got very close that she realized they're made of steel. It was then that I explained the concept of the Galleta Meadows sculpture park. We spent a good chunk of the afternoon driving through the valley looking at some really amazing creations. 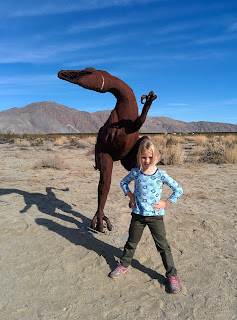 We danced with the Raptors. 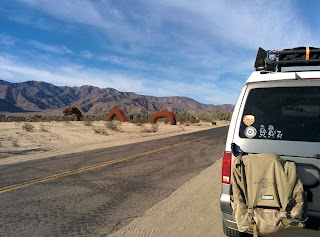 We watched from afar when a giant Sea Serpent crossed the road. 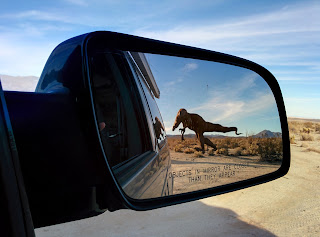 And we got chased by a T-Rex. Must go faster!

It was a beautiful weekend to be in the desert, and lot of other folks thought so too. We saw brave souls in a Hyundai sedan tackling some of the rougher roads, and even ran into an old friend from the American Adventurist group. After that, we headed South-East, and made our way to Hawk Canyon, as I'd been meaning to return since I'd last camped there in 2007.

One of the other changes that makes a Daddy-Daughter trip like this possible, where it wouldn't have been before, is the recent (and ongoing) work to the van to increase utility and decrease the level of effort needed to make and break camp. We were setup and ready to start dinner in less than half an hour after arriving. I found myself with the unusual blessing of having time to play Uno and do some coloring before I needed to get dinner going.

The one downside to our spot in Hawk Canyon was the neighbors. Upon our arrival we could hear the "untz untz untz untz" of loud techno music from the people in the prime spot at the end of the canyon. My instinct was to relocate but by then I'd already mentioned to Annika that I'd camped there before, and I think she was getting tired, so she made the call that the music "wasn't that bad" and we should stay. My friend John from Ursa Minor has talked about the downsides of Hawk Canyon being that its a bit too easy to get to, and popular with the noisy type, and now I believe him. 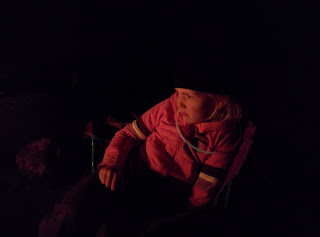 A nearly perfect moment, but for the sound track.

Watching a fire burning in my firepot, roasting marshmallows, and, per Annika's request, re-telling the story of how I met Kimberley (and the other story about how Kimberley met me), it was a really great bonding evening. But the music kept playing. It turns out our neighbors must have missed Burning Man this year, because they were doing their darnedest to make up for it. The rave music played, there was LED-light spinning (and later, actual fire-spinning), everything but a burning effigy.

By the time Annika was ready for bed, she'd had enough. At her urging, we wandered the 1/4 mile down the canyon to politely ask the party to turn things down. Nobody can refuse a polite six year old, at least not for long, so the music went quiet for a time. Luckily she went to sleep quickly. I wasn't quite so lucky, and before long, the impulse to spin fire took hold again, and the volume ramped back up until midnight or so. Bummer. So much for a quiet night in the desert.

Dawn always comes, though, and sunrise in the desert is one of my favorite things in the whole world. The colors there just can't be appreciated unless you experience them. We had a simple breakfast, and things were quickly stowed for departure. I suggested making a "courtesy" drive past our neighbors camp while blasting the Doubleclicks, just to make sure they didn't miss out on the sunrise, but Annika convinced me it would be more polite to let them sleep. She's a better person than I am.

At any rate, we had someplace to be. We took the very short drive from Butte's Pass to Borrego Mountain Wash and we were the first car in the parking area for the Slot. During our last visit here, we only went about half way down, since Annika didn't want to get too far from Kimberley who had stopped where things start to get really narrow. This time, she lead me all the way down to where the canyon opens into the Jeep trail, and beyond. I could barely keep up, since she fits between the cracks more easily than I do, even holding my pack over my head instead of strapped to my hips. 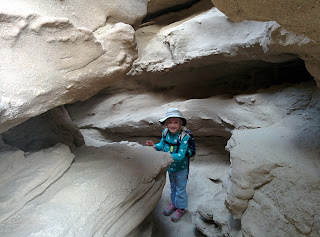 Dad, am I an expert hiker now?

She did great, and is getting stronger all the time. Before long, I'll be the one slowing us down and limiting the distance. She desperately wants to consider herself an "expert hiker", but I told her we can't call her that until I don't have to hound her to stay hydrated. Still trying to develop good habits, as always.

By the time we'd come back up out of the Slot, the parking area held a dozen cars (and we met nearly a dozen more on the road as we drove out), so I was glad to have had an early start. The rest of the trip went quickly and by the numbers. We had lunch and picked up a pie for Kimberley in Julian (Boysenberry Apple Crumb, natch), then Annika slept while I finished the drive home. All told, only about 29 hours, door-to-door, but you can always pack in a lot of adventure, if you try!
"My minivan is cooler than your bro-truck"
2003 Astro AWD Astrolander/ZMB - GTRV Top Transplant, 4" OLV Lift, NP233 T-case, evolving interior
1995 Safari GTRV Organ donor - gutted and gone. Very cool adventure, thanks for sharing!

I did the same adventures with my daughter. Ours included flights in my balloon. Memories for a life time.
1996 Safari SLX Hotair balloon transport vehicle
Top


No new projects until the current ones are done!
Top
Post Reply
4 posts • Page 1 of 1